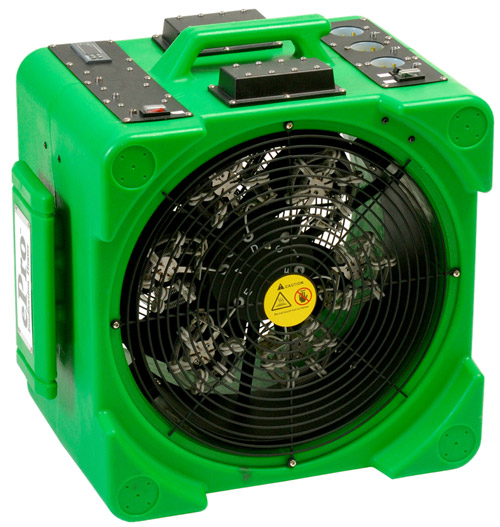 With bed bug heat treatment we constantly see advances in programs and training that help the industry.
Most of this is provided by the experts that make it their mission to study bed bug behavior and determine the best means of eradication with the least amount of impact to the general population.
Lately, though we have seen the introduction of small bed bug heat fans heaters that run off of 120 V circuits that are being used to heat hotel rooms and small apartment areas to eliminate bed bugs. They have also been implemented in heating larger areas as well usually be left in place to heat areas over a 24 hour period. This is not only unsafe but I believe will only spread issues to other parts of the hotel or building in which the treatment is taking place.

The thermal death point of bed bugs is 117° Fahrenheit. Studies show that 100% of all eggs will be rendered nonviable at 130°F if held for 10 minutes at that temperature. (Thank you, Stephen Kells.) In most cases, electric heaters are brought in that are generator fed so that temperature rise can be steady and usually lethal temperatures can be accomplished within 1 to 2 hours.

The newest equipment being marketed is fan-based bed bug heat fans heaters which plug into multiple circuits and are left in place for 24 hours or longer until the heat treatment is completed. These units are usually used in smaller areas of 300 to 400 ft.². It is common that even with the smaller areas 4 to 8 circuits are typically required. Unfortunately, in many buildings, the electrical requirements are not there to sustain the number of heaters to bring the temperature up to levels lethal to bed bugs at a uniform or fast enough rate.

Seeing firsthand the activity of bed bugs in response to heat causes some concern as the new methods may not be helping eradicate bed bugs but may in fact, be spreading bed bugs to other units. We have seen this with bed bugs fogging or bombing whereas one unit is treated with a total release aerosol and the insects that are not killed flee to all surrounding units. Typically what we see is an initial response once we get over 100°F of insects emerging from areas that they are harboring. Upon emergence, we see a probing behavior where the insects are testing the areas that they are on to see if it is something that they can feed upon. In many cases we actually see bed bugs moving towards the source of heat being provided to treat the apartment.

Once we get closer to the thermal death point of bed bugs we see a change in behavior. In certain cases, this involves the bed bug attempting to dig deeper into its harborage area or it will start to move away from the heat source looking for an area of lower temperature. With traditional heating methods where you can maintain a good and steady temperature rise of 15 to 30 degrees per hour, this is usually not an issue. Before the bed bug population can flee the area they have already been exterminated. With Bed Bug Heat fans and equipment that is providing a temperature rise of only several degrees in an hour the allotment of time that allows for escape is much too great.

Time will tell whether or not this new method ( small low-powered BedBug Heat Units used to kill bed bugs) is a good addition to what traditional thermal remediation companies are doing. But in many instances, these packages of bed bug heat units are being sold to management companies as well as hotels and motels that have little pest control experience. In addition, most pest application laws require a licensed individual to apply perimeter pesticides which would in this case help prevent the escape of these insects into adjoining areas. Overall though the main issue with the Bed Bug Heat fans is the slow heat rise.

Based on my experience with thermal remediation tactics over the last 11 years I believe we will see a worsening of the issue, an increase in spread patterns in both hotels and buildings that attempt to do this on their own using these Bed Bug Heat units, and detraction to the reputation of thermal remediation practices which have been, up until this point, when performed by professionals, stellar.

This site uses Akismet to reduce spam. Learn how your comment data is processed.

We use cookies on our website to give you the most relevant experience by remembering your preferences and repeat visits. By clicking “Accept”, you consent to the use of ALL the cookies.
Cookie settingsACCEPT
Manage consent

This website uses cookies to improve your experience while you navigate through the website. Out of these, the cookies that are categorized as necessary are stored on your browser as they are essential for the working of basic functionalities of the website. We also use third-party cookies that help us analyze and understand how you use this website. These cookies will be stored in your browser only with your consent. You also have the option to opt-out of these cookies. But opting out of some of these cookies may affect your browsing experience.
Necessary Always Enabled
Necessary cookies are absolutely essential for the website to function properly. These cookies ensure basic functionalities and security features of the website, anonymously.
Functional
Functional cookies help to perform certain functionalities like sharing the content of the website on social media platforms, collect feedbacks, and other third-party features.
Performance
Performance cookies are used to understand and analyze the key performance indexes of the website which helps in delivering a better user experience for the visitors.
Analytics
Analytical cookies are used to understand how visitors interact with the website. These cookies help provide information on metrics the number of visitors, bounce rate, traffic source, etc.
Advertisement
Advertisement cookies are used to provide visitors with relevant ads and marketing campaigns. These cookies track visitors across websites and collect information to provide customized ads.
Others
Other uncategorized cookies are those that are being analyzed and have not been classified into a category as yet.
SAVE & ACCEPT